Barcelona!! One of the cities that I longed to visit in Spain. I was finally there! There are a lot of wonderful sights in this city and Park Güell is one of it.It is one of the beautiful parks I visited in Europe. After our first stop which is the Sagrada Familia, we proceeded to this lovely park of Barcelona.

Park Güell is a garden complex with architectural elements situated on the hill of El Carmel in the Gràcia district of Barcelona, Catalonia, Spain. It is now listed in the UNESCO World Heritage Sites. It was designed by the Catalan architect Antoni Gaudí and was built from 1900 to 1914. 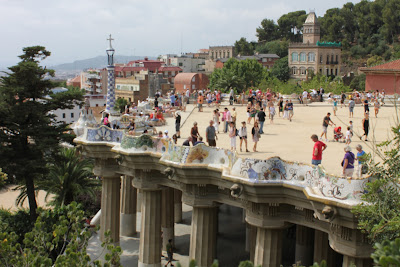 The so-called Terrace at Park Güell. From there you can  have a  nice view of the city. 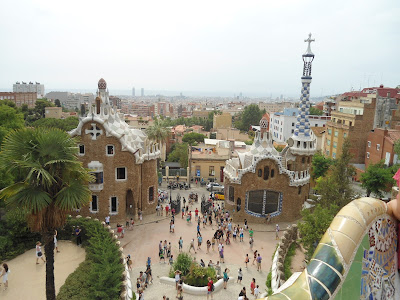 view of Barcelona from the terrace of Park Güell. You can  also see the  two buildings at the entrance of this park. These photos were taken during our recent visit last July 14, 2012.
The large cross at the Park's high-point offers the most complete view of Barcelona and the bay. It is possible to view the main city in panorama, with the Sagrada Família and the Montjuïc area visible at a distance.

The park supports a wide variety of wildlife, notably several of the non-native species of parrot found in the Barcelona area. Other birds can be seen from the park, with records including Short-toed eagle. The park also supports a population of Hummingbird hawk moths.
By Admin - July 19, 2012 1 comment:

This Floating Chinese Restaurant in Amsterdam

We just saw this floating Chinese restaurant in Amsterdam when a had a canal cruise  in this city. It is actually called the Sea Palace. This pagoda-style restaurant is located near the center of Amsterdam near the Central Station.

We don't have the chance to go inside and taste their food. Our friend who lives in Holland brought us to another Asian restaurant and we did not regret going inside  because the food and the ambiance were  good. I can't exactly remember the name of that restaurant.

I read some  reviews online about Sea Palace. Others had bad experiences and some had  nice ones. I might try it in my next visit to this city. 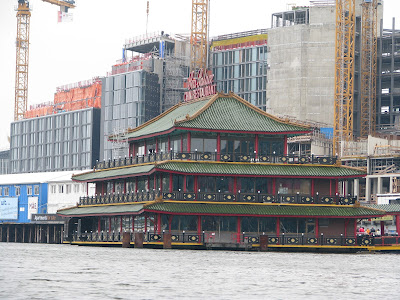 Last summer 2011 was my second visit to Czech Republic's capital city. My first visit was last September 2009.  Prague is around 3 hours drive from where we live in Bavaria, Germany.

I was invited by a friend to accompany her mother-in-law who was having a vacation that time in Europe. Some of her family members also went us. I was happy after hearing it and did not hesitated to show them Prague City. I was still quite familiar with Prague's vicinity especially the main sights to see. We have  seen most of the famous landmarks including the Old Town with Tyn Church, the astronomical clock at the Old Town Hall, Charles bridge, the Prague castle and more.

Our sightseeing tour ended with a dinner in  one of the restaurants in Prague. Thanks to my fiend's husband who was very eager to drive us to  this city. 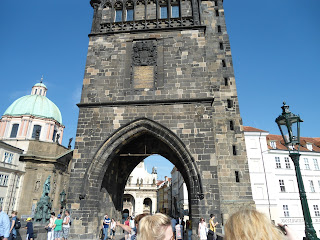 One of the bridge towers of  the Charles Bridge during  my second visit last July 2011. 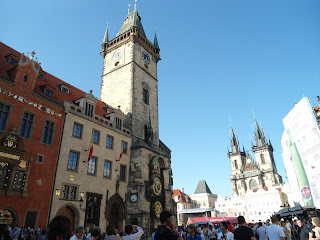 The Tyn Church with its two towers on the  right side and the Old Town Hall with its astronomical clock on the left-middle  side.
By Admin - May 08, 2012 5 comments:

Got Some Red in Louvre Museum, Paris

My hip hurts after working the whole afternoon in our garden. I did not stop until the rain starts to pour. That was a tiring but nice day for me. I got some red here which is my jacket. This was taken during our trip in Paris, France last March of this year. I finally saw some of what are inside the Louvre museum..and yes including the famous Monalisa painting of Leonardo da Vince. take care folks!
Feel free to visit Ruby Tuesday and Wordless Wednesday to see more photos! Happy RT and WW Day!
By Euroangel - October 06, 2009 1 comment:

Before I sign-off for tonight, let me share first my first entry in Scenic Sunday! I guess this is a very beautiful scene taken outside Louvre Museum in Paris, France during our trip last March of this year. From afar, you can see the replica of the Arc of Triumph. That's me facing with the red and white jacket facing to that replica..

Thanks to the The Holleys, the organizer of Scenic Sunday for this very wonderful meme! more Scenic photos next time!

Click the logo to join and see Scenic Sunday photos around the world! Happy a great day!

A visit to one of the most visited cities in the world is such a fantastic experience! I was finally in Paris, France. I got a photo below taken in Louvre Museum. I also had the chance to enter to this museum and witnessed their historical and great collections. more updates in my other blogs..time to go to sleep now! take care everyone!
amazing architecture! The Louvre Museum in Paris, France. so happy to be there!
By Euroangel - June 16, 2009 3 comments:

Arc de Triumph in Paris, courtesy photo by yours truly during our trip last March 28, 2009! That was a great trip!!

Paris Trip, I love it!

The month of March is almost ending in Europe. I hope that you had a great month for March. I also wish you another great month for April. As for me, March is another good month. I had some accomplishments for this month. Some of the accomplishments I considered are buying a small lot back home and my trip to Paris last Saturday. I know these are not really great accomplishments but at least I had done something which I can be proud of. Feel free to visit my other blogs for more updates especially my Euro Travel Blog!

You can see in the background of the photo the Eiffel Tower in Paris, France. I am happy and contented to visit one of the dream cities I want to go. It was a great experience seeing one of the famous cities around the world.

I won't stay too long here because I am already very sleepy now!
I wish you good luck in the next month to come..The month of Tulips as I called it! take care guys!
the famous Eiffel Tower in Paris, France during our trip last Saturday March 28, 2009.
By Euroangel - March 31, 2009 No comments: