The temple of Artemis in Ephesus, Turkey

It was over a year now since we visited Turkey. It was so far a very interesting trip seeing some of the historical ruins in this country. I could not believed  that  Turkey has a lot of  impressive ruins to visit. Some of it are even included in  the Seven Wonders of the  Ancient World.

One of the historical sites we visited  was the Temple of Artemis. After our sightseeing  at the ruins of Ephesus, we proceeded to this area. It is actually located in this area but our bus drove a bit as we went there. It is located near the town of Selcuk  in today's Turkey.

The Temple of Artemis is also known as the Temple of Diana, a Greek  temple dedicated to the Greek goddess  Artemis. It is considered as one of the Seven Wonders of the Ancient   World.

That 10-day trip we had in Turkey was truly a memorable one for me. It truly made me feel like traveling back in time seeing  some of those magnificent historic ruins in this country.

I hope to be backed there again and visit more historic  sights.

It is a beautiful sunny day today. I love this weather during fall season. It is quite cold outside but I don't have to worry because I am actually inside the house now.

It was over a year now when we had a 10-days trip in Turkey, the only country that can be found  both in Asia and Europe. One of the  places we visited  was its capital city, Istanbul. I can't believed that there are also a lot of interesting historical sights in this city.  To name a few are the  Hagia Sophia, Sultan Ahmet Mosque, Topkapi Palace, Basilica Cistern and many more.

For me the highlight of our trip in Istanbul was the short cruise we had in the Bosphorus or Bosporus. It is also called as the Istanbul Strait and form as the boundary of Asia and Europe.  There are a lot of sights you can when cruising in Bosphorus, from Mosque to historical buildings and houses and villas that are  lined-up along the strait.

I am quite contented with that trip we had in Turkey last September 2011. 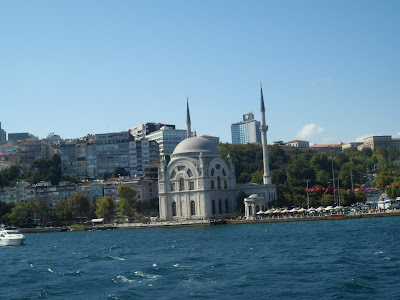 The Library of Celsus in Ephesus, Turkey

Travel photos and memories! These are all the things I always have after I travel. Last September 2011, we had the chance to visit Turkey for 10 days. We might not be able to see everything in this country but at least we visited some of its famous sights. One of it was Ephesus, Turkey.

It was a sunny hot afternoon as our tour guide toured us around this famous ruin if Ephesus. Thanks to our tour guide's information when he told us that Ephesus was once a Greek city. It became later a major Roman City.

Ephesus is located in Selcuk in the Izmir province of Turkey. It was one of the twelve cities of the Ionian League during the Classical Greek era.

One of the interesting ruins we saw there was the Library of Celsus. It was built in honor of the Roman Senator Tiberius Julius Celsus Polemaeanus. It was completed in 135 AD by Celsus’ son, Gaius Julius Aquila (consul, 110 AD).

Let me share again another travel experience we had in Turkey. It was so far a wonderful 10-day trip we had in this Eurasian country. It is called Eurasian since it is located both in Asia and Europe. I can't believed that Turkey has also a lot of things to offer to every tourist and visitor like me.

I immediately booked the holiday package to Turkey when I saw it in a travel leaflet sent to us last year. I don't have to search for flight reviews for any airlines during that trip because it was already included in the package. Accommodation with breakfasts and dinners, tours to different places, cheap flights, airport transfers, tour guides were also included in that trip. I can't believed that we will also stay in one of the 5-star hotels near Istanbul for four nights. It was really a very cheap holiday for only 799.00 Euros all include.

Some of the places we visited during that holiday
were;

Istanbul- This is Turkey's cultural and financial center. It is also the most populous city in the country. No wonder you can see a lot of newly erected buildings in the city and its surroundings, a sign that Istanbul is continually developing. Among the sights we visited were the Hagia Sophia, Blue Mosque, Spice Bazaar, Grand Bazaar, Basilica cistern, Dolmabahce palace and many others. We were not able to go inside Topkapi Palace because it was under renovation that time. 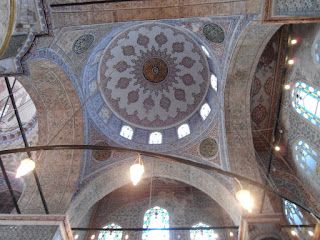 The dome of the Sultan Ahmed Mosque or Blue Mosque in Istanbul. We were there last September 2011.
A day or two is not enough to discover everything in Istanbul but I was quite contented that at least I experienced it. The highlight of our sightseeing in Istanbul was the cruise we had in Bosphorus strait to the Golden Horn. It was awesome!
Ephesus- The architecture in this area truly fascinated me. I can't imagine how it was built during those ancient times. You have to remember that Ephesus was an ancient Greek City. It is one of the major tourist attractions in the country. The temple of Hadrian, the Theater, the Celsus Library, the Odeon and the Gate of Augustus are only some of the famous monuments to see in Ephesus.

I am quite sad because we were not able to visit the House of Mary and the Tomb of John the Apostle at the Basilica of St. John. These might be a reason that I might visit it again. I am glad because we had the chance to visit the site of the Temple of Artemis. 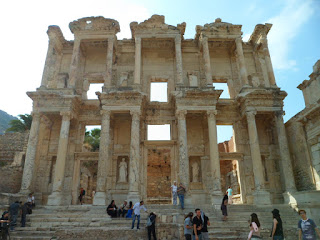 The Library of Celsus in Ephesus, Turkey. I was there! It was an amazing experience!
Aphrodisias- Another interesting archaeological site we visited in Turkey. It was a small city in Caria, on the southwest coast of Asia Minor. Aphrodisias was named after Aphrodite, the Greek goddess of love. This is where you can find some of the most impressive Roman ruins in Turkey.

Some tourists found Aphrodisias a better site to visit than Ephesus but I found Ephesus more interesting. The Tetrapylon, the Agora, Bouleuterion, Temple of Aphrodite, Stadium and the Bathhouse are among the famous structures in this area. You can also visit the Aphrodisias Museum which is included in the entrance free in this site. 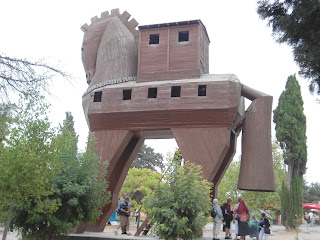 The Trojan Horse in Troy, Turkey. I guess I am going back to this place in the future because we really never had the chance to go up to the horse. Besides it was raining so hard during our visit.
Troy- I believed you are very familiar with Trojan virus especially if you are using a computer. It is said that the name of this computer virus was derived from Troy. This city is considered to be factual and legendary. It is best known for being the setting of the Trojan War described in Iliad, one of the epics attributed to Homer.

It was raining during our visit there but it was worth-it especially knowing its archaeological importance and history. Troy or Troia is now in the list of the UNESCO World Heritage Sites since 1998.

Other places we visited during that 10-day trip last year were Izmir, Pamukkale, Bursa and Pergamum. It was so far one of the fascinating and awesome trips I had last 2011. 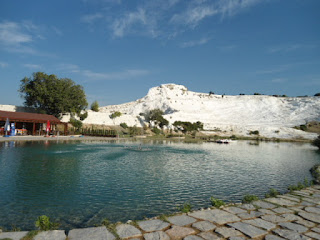 I thought I can only see images of Pamukkale in Turkey in the internet or in a postcard. I was so happy that we had a short stop-over here during our trip to Turkey last September 2011. It is not really included in our itinerary but since we will also be passing it on our way to Izmir, our tourist guide allowed us to have a short stop.

This amazing beauty and wonder of nature is awesome. I believed there is not even one hydraulic power unit in this area. I am wondering what is the source of power and electric there. For all you know, this natural beauty is included in the list of the World Heritage Site since 1988. Lastly, you might wonder what does Pamukkale means? It is a Turkish word which simply means "cotton castle". Truly interesting!
By Admin - January 17, 2012 1 comment: