I had a great fun watching the carnival in Velburg here in Germany. Despite of the rainy and snowy weather, the carnival parade still pushed through. Different groups participated in the parade. Some people (with costumes) I asked to have a pose with me are really nice and friendly. Look at this photo here, the lady with the yellow costumes, I guess was presenting as a duck. Different attractive and colorful costumes were seen during the parade. I believed it was a successful one despite the unfriendly weather!! cheers to all!! have a great Monday guys!!

feel free to visit my other sites for more photos!! take care!!
By Euroangel - January 15, 2010 No comments: 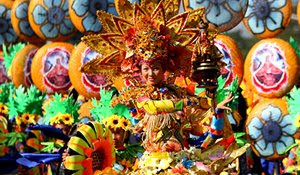 Today is the Sinulog celebration in Cebu City, Philippines. It is considered to be one of the grandest and famous festival in the Philippines. It is also known worldwide being visited by tourists coming from the different parts of the world. Above is a very lovely and colorful photo of Sinulog festival participants. How I wish to have a vacation in teh next Sinulog. Below is an info about Sinulog from Wikipedia.

The Sinulog is an annual festival held on the third Sunday of January in Cebu City, Philippines. The festival honors the child Jesus, known as the Santo Niño (Holy Child), patron of the city of Cebu. It is a dance ritual that commemorates the Cebuano people's pagan origin, and their acceptance of Christianity.

The festival features a street parade with participants in bright-colored costumes dancing to the rhythm of drums, trumpets, and native gongs. Smaller versions of the festival are held in various parts of the province, also to celebrate, and honor the Santo Niño. There is also a "Sinulog sa Kabataan", performed by the youths of Cebu a week before the grand parade.

Recently, the festival has been promoted as a tourist attraction, with a contest featuring contingents from various parts of the country. The Sinulog Contest is usually held in the Cebu City Sports Complex.
By Euroangel - January 18, 2009 No comments:

Halloween (or Hallowe’en) is aholiday celebrated on October 31. Halloween activities include trick-or-treating, ghost tours, bonfires, costume parties, visiting haunted attractions, carving jack-o'-lanterns, reading scary stories, and watching horror movies. Irish and Scottish immigrants carried versions of the tradition to North America in the nineteenth century. Other western countries embraced the holiday in the late twentieth century. Halloween is celebrated in several countries of the Western world, most commonly in the United States, Canada, Ireland, Puerto Rico, Japan, Australia, the United Kingdom, and at times in parts of New Zealand.
By Euroangel - October 31, 2008 No comments:

Fun in Oktobefest in Munich, Germany

I was finally in Oktoberfest for the first time. I hope to share more experience I had there..but now I just don't have enough time.. I have to prepare for my stuffs in going to Prague tomorrow and need to go to sleep early..Just visit my other sites for more photos and updates!!

have a great weekend to all!! take care everyone!! see yah on Sunday!!

My Lunch in the Oktoberfest in Munich

Did you see that food above?..Oh well that was my lunch yesterday in the famous and historical Hofbrauhaus in Munich. It is called Puten Snitzel with Noodle with tomato sauce. My husband ordered his own food too. But where are our appetizers?? Honestly I forgot to order it because I was really very hungry at that time. I believed taking lunch around 3PM is already very late. What do you think? The most important thing, I had my lunch in this famous restaurant and beer house in Munich. I had a lot of fun yesterday in the Oktoberfest. For more updates, please visit my other sites..I will be posting more photos there!! have a great evening to all!!


the menu book of the famous Hofbrauhaus in Munich..
By Euroangel - September 25, 2008 1 comment:

showing how the people dressed and lived during the older times..this is how the Tillyfest is all about....remembering the older times!!
photo by Euroangel
participants of the Tillyfest in Breitenbrunn, Germany
I already woke-up so late today..Imagine waking up 11:30 AM. It is Sunday anyway and that's how we spend our weekend, sleeping to the max. Actually I can't sleep good last night. I spent reading a travel book until 3:00 AM and that's the reason why I woke-up so late. I immediately warmed-up the Schweinebraten (baked pork) I made yesterday. I put my home-made sauce in the baked pork and it really taste so good. It is one of my favorite German food. After we ate our lunch at 1:30 PM, we immediately got ready and headed to Breitenbrunn to witness the Tillyfest. The parade started at 2:00 P.M. and it started already as we arrived there. It is the first time, I watched the parade in this celebration which is always held here in Breitenbrunn every September.

We really have fun watching the feast. Today was really a beautiful.

To view more photos and infos about Tillyfest, please also visit my other sites. Thanks a lot!!
Enjoy the rest of your weekend!! Just sharing some pix I took from the Feast!!

the beautiful and attractive designed customs of the participants
there she is wanting to ride this huge horses with carriage
By Euroangel - September 14, 2008 No comments: