Emergency Visit to the Eye Doctor

When emergency arises,  the best thing to do is to consult the professional or experts immediately.  This needs to be done as soon as possible especially if your health is at risk.

I don't exactly know what happened  the other day. I just had a walk for around two  hours in our area, went home and at night,  I already had a problem with my left  eye. It started to get  itchy after our walk last Sunday. At  night, I was already rubbing it and I guess it  was  irritated.  I thought it was only a pimple that grew in my eyelid but yesterday  it became bigger.

I applied a cream last night  for infection hoping it will get better  when I woke up this morning but  it is still swollen.  After taking my breakfast today, I decided to go to the eye doctor immediately to ask for medication.  He  gave me a prescription. This eyedrop is an  antibiotic and I  need to apply it four times a day.  I hope  my swollen eye will get better soon.

I actually asked the doctor what it was but he said my eye has a sort of infection. He cannot really explain exactly what it is. While searching online,  I can probably say, this is called a stye.


According to wikipedia,   "a stye is an infection of the sebaceous glands of Zeis at the base of the eyelashes, or an infection of the apocrine sweat glands of Moll. External styes form on the outside of the lids and can be seen as small red bumps. Styes are most commonly caused by the blocking of an oil gland at the base of the eyelash. Although they are particularly common in teenagers, styes are experienced by people of all ages. Styes can be triggered by poor nutrition, sleep deprivation, lack of hygiene, lack of water, and rubbing of the eyes".

I guess that is all for now.   I  am trying  my best to go to bed  earlier now to practice a better and healthier life. I can probably avoid having a stye by  going to bed earlier. Cheers and stay happy and healthy all the time.

Got An Anonymous Call

I received an anonymous call this morning. I don't have any idea who was calling on the phone. That was also the reason why I didn't mentioned the German standard greetings by telling the family name and a greeting like "guten Morgen" (good morning), guten Tag (good day), etc. I was asking the other line of who she was because I am quite afraid that these might be one of those telephone callers who are scamming again. The first time I asked her, she did not answered because I said it in English. When I already asked her in German language, she immediately told me who and from where she was calling. I did not expected that the telephone number of my dentist is already private now. The secretary told me that I can already have another dental appointment tomorrow.

I am just very careful now with anonymous callers because we already had horrible experience from them. That was also the reason why we changed our telephone number into private. We are glad that we did it. The stress from anonymous callers is finally over.
By Admin - May 16, 2011 No comments:

I finally went to our so-called house doctor last Friday. I had some check-up and at the same time I got some referrals for another three specialists. One referral is for my Gynecologist for yearly check-up. The other one is for ENT doctor in which I already have an appointment this coming Tuesday. I also need an appointment for an internist doctor. I really don't like to visit the doctor or hospital but when needed I have no choice. For sure, I will be seeing again some point of care carts when I will be visiting these doctors. I also hope that all the check-ups will turn out good. I always wanted to be healthy and always try my best to take care of myself. How about you? Goodnight folks. I need to slowly go to bed. Take care everyone!
By Admin - April 03, 2011 No comments:

Visit to the ENT Doctor

I really don't have an appointment with the doctor last Monday. I just accompanied a friend and her daughter who had an appointment with ENT (Ear Nose and Throat) doctor, called in German language are HNO (Hals, Nase und Ohren) Arzt. My friend brought me with her to help her translate if ever she cannot understand any German words. That is the problem here in Germany because not all doctors can speak English. I had the same problem five years ago since I don't speak and understand German during those times.I really had a difficulty with communication.

That was a perfect timing last Monday and I am thankful that I accompanied my friend. Its been a long time since I wanted to visit the ENT doctor due to some problems with my left ear. Sometimes, I hear some annoying sounds inside it. The doctor checked it quickly and he said that there is this so-called negative pressure in my left ear. I don't have an appointment that time, so the doctor advised me to have an appointment for next week for more intensive check-up. I hope that it is not too bad.
By Admin - March 30, 2011 No comments:

Appointment with My Gynecologist

It's almost midnight again. I was watching downstairs a movie but can't finish it because I am feeling sleepy now. I also need to wake-up early tomorrow for my appointment with my gynecologist. I received a letter from her two weeks ago reminding me of my yearly check-up. I guess my Gyne loves me. She always tells stories to me every time I have an appointment with her. She is also very friendly. That is around thirty drive from where we live. After my appointment, I need to go some grocery shopping. I don't have the desire to go the past days.

Ladies out there especially if you are over thirty years young, don't forget to to visit your gynecologist for your yearly checkl-up. Just a friendly reminder. Goodnight to all my friends online. I wish you all a great week ahead!
By Euroangel - October 08, 2009 No comments:

I woke up a bit earlier today because I have to go for grocery shopping too. My appointment was 1pm so after I went shopping around 12 noon time, I drove there immediately. The place was around 45 km drive from our home. So from Parsberg to Laaber, I drove thru the Autobahn or Motorway from 130 to 150km/h..well tha't's only how I drive to be in the safe side..There I can drive faster compared to driving in the Landstrasse or backroad..

And you know what happen, the Receptionist told me that my appointment is 1:30pm and I arrived there around 12:30pm..She also said that the Doctor will come at 2pm. well, what can i do ??...What I do instead was went walking to the Laaber Castle Ruins...well again.. been here in this place but not yet to the castle ruin..

It was not so far from the Clinic so I decided to climb there..It was a bit windy and cold..but it's ok besides also breathing fresh air up the hill!! got some pix also here from the place..

As I went back to the clinic I had to wait a long time more because the secretary said that the Doctor had a traffic in Autobahn 3 or Motorway number 3, the longest highway in Germany..guess what time I had my examination....lagot na ko kaayo pero saon man!! At around 3:15pm, my appointment was over.

I hurried up home because I still have to cook for dinner before my hubby come home from work..After eating, we brought my car to his brother-in-law for fixing some scratches on my car..That was the accident in February, as an old woman hit my car in a park place in Neumarkt..

well, just got a hectic day today!! It's still a beautiful day because the weather was very nice!! Thanks God!! 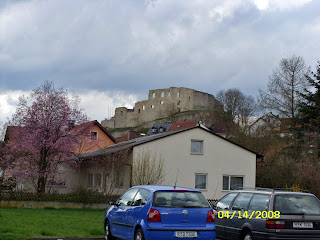 view of the Laaber castle ruins from afar 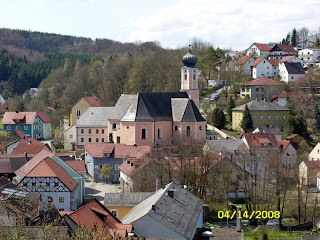 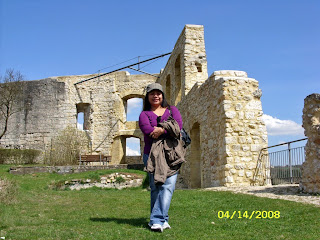 the gurl modelling in the Castle Ruins..wahehehe naa mo ana!! 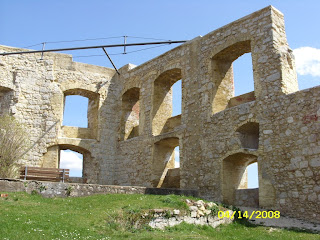 the Remains of the castle which was built around the 1200 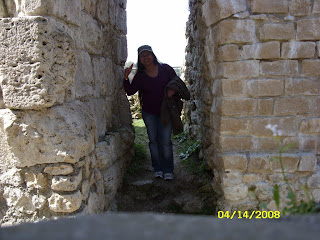 I had a Physical Therapy appointment today. I just like my P'Therapist because she made a very good massage. I got before back pains but since I was having massage and fango, I am feeling very better now. My back pains don't keep on coming back just like before. Oh yeah..guess this is what I got working so hard here in Europe..So now I just stayed at home doing blogging and meeting friends online..hehehe!!

I was before in different PT's but I was not contented and satisfied the way they made the massage. Finally I found the right clinic or Reha as called in German and I am very satisfied with their service.

As I was today in my appointment, it was snowing very hard. I even got some photos which I took as I was in the second floor of the clinic. Hopefully will post it tomorrow once I download it.

Got to sign-off now as I was also not feeling so good having some headache...guess migraine too!! Hope to visit fellow friends bloggers tomorrow when I have time as I also have a lot of errands to do even got another appointment for my gycologist.

Finally thanks guys for keep on visiting me here...will visit you once I got time..Thanks a lot!!!

What a Crazy Day!!

I suppose to have an appointment at my Physical Therapist for massage today. As I woke up around 8am, I felt my head very heavy, so I decided to call them to cancel my appointment. It was raining so hard this morning, a little stormy and really a bad weather.

In short it is a crazy weather today because right now, the sun is shining again. I just went out a while ago picking up the newspaper and some mails outside and the rain starting pouring again. I believed sometimes the cause of my headache and migraine is this crazy weather we have in Germany. What you do think???

So I just spent my day, staying in the house, do some cooking and blog hopping again!!..I guess the pop-ups are all gone now!!! i hope so as I never encountered it during my blog hopping!!! So please dear hackers, I hope you see the hard work we put on our blogs everyday!!! just some respect and do honest work and you will also be rewarded!!!