The Basilica of the Sacred Heart of Jesus of Paris

I am letting you know that taking pictures are forbidden inside the Basilica. 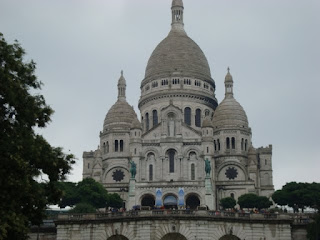 It is a popular landmark of Paris. The basilica is located at the summit of the butte Montmartre, the highest point in the city. is built of travertine stone quarried in Château-Landon (Seine-et-Marne), France. This stone constantly exudes calcite, which ensures that the basilica remains white even with weathering and pollution.
By Admin - January 17, 2011 No comments:

Arc de Triumph in Paris, courtesy photo by yours truly during our trip last March 28, 2009! That was a great trip!!