I read this in one of the site I stumbled into..I find it quite interesting for some reasons...hope to have time to share why I am doing some readings and research of what really pagerank is???keep reading!!! wish everyone in advance a very great and blessed weekend!!!

When you type a search term into Google and click Search, Google starts looking through its database for pages with the words you’ve typed. Then it examines each page to decide which pages are most relevant to your search. Google considers many characteristics: what the title/ tag says, how the keywords are treated (are they bold or italic or in bulleted lists?), where the keywords sit on the page, and so on. It also considers PageRank.

Clearly it’s possible for a page with a low PageRank to rank higher than one with a high PageRank in some searches. When that happens, it simply means that the value provided by the high PageRank isn’t enough to outweigh the value of all the other characteristics of the page that Google considered.

I like to think of PageRank as a tiebreaker. Imagine a situation in which you have a page that, using all other forms of measurement, ranks as equally well as a competitor’s page.

Google has looked at both pages, found the same number of keywords in the same sorts of positions, and thinks both pages are equally good matches for a particular keyword search. However, your competitor’s page has a higher PageRank than yours.

Which page will rank higher in a Google search for that keyword? Your competitor’s. Many people claim PageRank isn’t important, and that site owners often focus too much on PageRank (that may be true). But PageRank, or something similar, definitely is a factor. As Google has said:

“The heart of our software is PageRank(tm), a system for ranking web pages developed by our founders Larry Page and Sergey Brin at Stanford University. And while we have dozens of engineers working to improve every aspect of Google on a daily basis, PageRank continues to provide the basis for all of our web search tools.”

By the way, you could be forgiven for thinking PageRank document, Larry Page. (The other that the term PageRankcomes from the idea of, founder is Sergey Brin.) The truth is probably well, ranking pages. Google claims, however, somewhere in between. Otherwise, why isn’t it that it comes from the name of one of the the PageBrinRank?

I want to quickly show you the PageRank algorithm; but don’t worry, I’m not going to get hung up on it. In fact, you really don’t need to be able to read and follow it, as I explain in a moment. Here it is:

I could explain all this to you, honestly I could. But I don’t want to. And furthermore, I don’t have to because you don’t need to be able to read the algorithm.

Rather than take you through the PageRank algorithm step by step, here are a few key points that explain more or less how it works:

As soon as a page enters the Google index, it has an intrinsic PageRank. Admittedly, the PageRank is very small, but it’s there.

A page has a PageRank only if it’s indexed by Google. Links to your site from pages that have not yet been indexed are effectively worthless, as far as PageRank goes.

When you place a link on a page, pointing to another page, the page with the link is voting for the page it’s pointing to. These votes are how PageRank increases. As a page gets more and more links into it, its PageRank grows.

Though rare, this could happen if you have a page that many external sites link to that then links directly to an area of your site that won’t benefit from PageRank, such as a complex e-commerce catalog system that Google can’t index or an external e-commerce system hosted on another site. Unless the page links to other pages inside your Web site, it won’t be voting for those pages and thus won’t be able to raise their PageRank.

A single link from a dangling page can channel that PageRank back into your site. Make sure that all your pages have at least one link back into the site. This usually isn’t a problem because most sites are built with common navigation bars and often text links at the bottom of the page.

What Are Spam Blogs?

I searched and found this topic in Google help page very useful and interesting..I am sharing this to fellow bloggers for your infos. I hope that you got some ideas about it..Some bloggers like me may not be aware of this..At least now, I already have some more ideas what really blogging is...Thanks to Google for this very good information...I hope I can explain to you next time why I am doing this research.

Before I forget, I am really very busy the past days!! I hope that I can visit all of you as soon as possible when time permits..I really appreciate all your visits here..Thank you very much!!! Everything is greatly appreciated!!

What Are Spam Blogs?

As with many powerful tools, blogging services can be both used and abused. The ease of creating and updating webpages with Blogger has made it particularly prone to a form of behavior known as link spamming. Blogs engaged in this behavior are called spam blogs, and can be recognized by their irrelevant, repetitive, or nonsensical text, along with a large number of links, usually all pointing to a single site.

Spam blogs cause various problems, beyond simply wasting a few seconds of your time when you happen to come across one. They can clog up search engines, making it difficult to find real content on the subjects that interest you. They may scrape content from other sites on the web, using other people's writing to make it look as though they have useful information of their own. And if an automated system is creating spam posts at an extremely high rate, it can impact the speed and quality of the service for other, legitimate users.

My very dear trusted friend forwarded me this email..well this is just very important esp. to all bloggers!! so please read!!

Your site's ranking in Google search results is partly based on analysis of those sites that link to you. The quantity, quality, and relevance of links count towards your rating. The sites that link to you can provide context about the subject matter of your site, and can indicate its quality and popularity. However, some webmasters engage in link exchange schemes and build partner pages exclusively for the sake of cross-linking, disregarding the quality of the links, the sources, and the long-term impact it will have on their sites. This is in violation of Google's webmaster guidelines and can negatively impact your site's ranking in search results.

Examples of link schemes can include:

· Links to web spammers or bad neighborhoods on the web

· Excessive reciprocal links or excessive link exchanging (”Link to me and I’ll link to you.”)

According to Google, these are some of the reasons why a blog/site can be penalized and have a lower page rank.

Google says that you should have not more than 100 URLs of all
sites including yours in a page. Google takes seriously the cases like
"link farming", buying links, spamming, etc.
By Euroangel - April 21, 2008 No comments:

Hi to everyone!! A lot of people might not understand what really PR or PageRank means in Blogosphere..I just known it for quite not too long.. I also have to admit that until now, I still have to learn a lot about the Blogging World!!

This topic about PageRank just interest me. I searched it in Google and found and grabbed it from my favorite Wikipedia.

What is Google PageRank

PageRank is a link analysis algorithm that assigns a numerical weighting to each element of a hyperlinked set of documents, such as the World Wide Web, with the purpose of "measuring" its relative importance within the set. The algorithm may be applied to any collection of entities with reciprocal quotations and references. The numerical weight that it assigns to any given element E is also called the PageRank of E and denoted by PR(E).

The name PageRank is a trademark of Google. The PageRank process has been patented (U.S. Patent 6,285,999 ). The patent is not assigned to Google but to Stanford University. 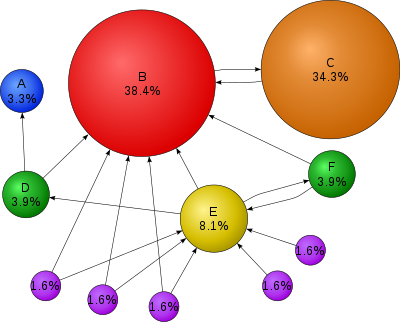 Mathematical PageRanks (out of 100) for a simple network (PageRanks reported by Google are rescaled logarithmically). Page C has a higher PageRank than Page E, even though it has fewer links to it: the link it has is much higher valued. A web surfer who chooses a random link on every page (but with 15% likelihood jumps to a random page on the whole web) is going to be on Page E for 8.1% of the time. (The 15% likelihood of jumping to an arbitrary page corresponds to a damping factor of 85%.) Without damping, all web surfers would eventually end up on Pages A, B, or C, and all other pages would have PageRank zero. Page A is assumed to link to all pages in the web, because it has no outgoing links.

In other words, a PageRank results from a "ballot" among all the other pages on the World Wide Web about how important a page is. A hyperlink to a page counts as a vote of support. The PageRank of a page is defined recursively and depends on the number and PageRank metric of all pages that link to it ("incoming links"). A page that is linked to by many pages with high PageRank receives a high rank itself. If there are no links to a web page there is no support for that page.

Google assigns a numeric weighting from 0-10 for each webpage on the Internet; this PageRank denotes a site’s importance in the eyes of Google. The scale for PageRank is logarithmic like the Richter Scale and roughly based upon quantity of inbound links as well as importance of the page providing the link.

Alternatives to the PageRank algorithm include the HITS algorithm proposed by Jon Kleinberg, the IBM CLEVER project and the TrustRank algorithm.

Please read The World Wide Web Addict for more infos..Thanks..See you later!! Have a great day to everyone!!
By Euroangel - April 07, 2008 No comments: