I was quite lazy going out today because I am not feeling so well. There are a lot of Faschings or carnival parade going around in the nearby towns and villages like in Velburg, Lupburg, Nuremberg, Breitenbrunn, Painten, Toeging and many more. Most of the parades start at 2:00 p.m. I even told some friends that we are not going anywhere because of the cold weather besides I am not also feeling good. 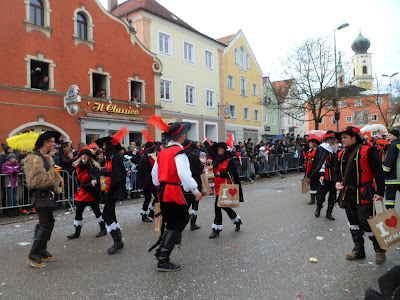 these group of young people had fun dancing and singing during the carnival parade in Hemau today.
At around 1:00 p.m. when I was setting in front of my laptop, hubby knocked at my pc room and asked if I want to watch Fasching in Hemau. I thought he don't want to because he is also sick. I guess he was motivated when he saw the sun shining outside. To make the story short, we went to the Fasching to witness the carnival parade in Hemau.

Since we were almost late, there was no more available parking space near the town center and we parked our car around 500 meters from there. While on our way to the town center, there was this man ahead of us and was smoking a cigar. I am not sure if he was using a hoyo de monterrey cigar. It just came to my mind because it is a famous one.

I believed the celebration was again a success. There were a lot of groups who participated during the parade with different motives and colorful costumes. Various floats with colorful designs can also be seen. We had fun during that event. This is one thing I love about Germany. Germans love to party and to celebrate especially when it is a part of their culture and tradition. 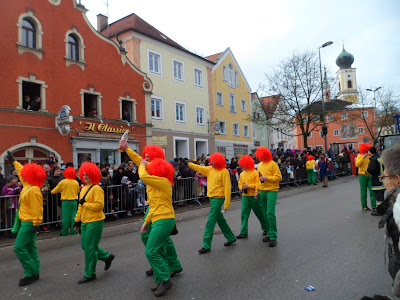 most of the participants in this group were already drunk..at least they had fun also. see the beers they are holding in their hands?
By Admin - February 19, 2012 No comments:

I had a great fun watching the carnival in Velburg here in Germany. Despite of the rainy and snowy weather, the carnival parade still pushed through. Different groups participated in the parade. Some people (with costumes) I asked to have a pose with me are really nice and friendly. Look at this photo here, the lady with the yellow costumes, I guess was presenting as a duck. Different attractive and colorful costumes were seen during the parade. I believed it was a successful one despite the unfriendly weather!! cheers to all!! have a great Monday guys!!

feel free to visit my other sites for more photos!! take care!!
By Euroangel - January 15, 2010 No comments: 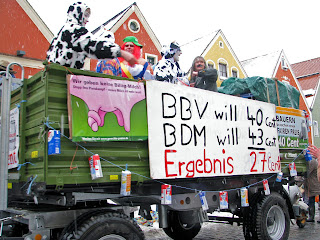 One of the participants during the carnival parade in Velburg, Germany
By Euroangel - February 25, 2009 No comments: